Is Biden Stepping Out of Obama's Shadow?

Biden has the chance for a transformative presidency. 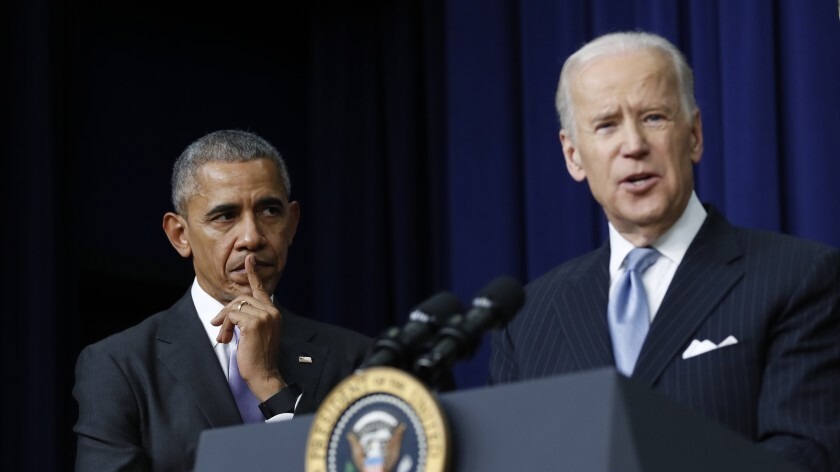 Despite President Biden being much older than President Obama, Biden has often seemed to be the stereotypical little brother in the relationship. Obama was cool and intellectual, Biden was the likable sidekick. Obama was the political wunderkind, Biden was the two-time presidential candidate failure. However, this year, the relationship is flipped: whereas Obama was constrained by his circumstances and let down some of his supporters, Biden is riding the current political moment to political success.

In 2016, Obama had to choose a successor between two important figures in his administration: Hillary Clinton and Joe Biden. Both had faced him in the 2008 Democratic primary and Clinton proved to be the more impressive opponent, battling Obama until the bitter end. Obama and Biden eventually formed an unlikely friendship, but in demeanor, they could not have been further apart. Biden’s sentences went on and on, often illogically. When discussing Biden’s comments on economic stimulus, Obama said, “I don’t remember exactly what Joe was referring to — not surprisingly”(NYT). In contrast, Obama would internally wrestle with issues for days, leading Biden to call him “deliberate to a fault.”

Eventually, Obama backed Clinton as the better candidate and potential president. Just like the behind-the-scenes maneuvering before Super Tuesday, Obama would never publicly push Biden not to run but let strategist David Plouffe deliver the long odds: Biden was likely running behind Bernie Sanders and Clinton. “The president was not encouraging,” Biden said (NYT). Obama likely felt some kinship to Clinton, as they are both technocratic leaders who do their homework. Obama until recently viewed the politics through the lens of his own success — a great politician will be charismatic and groundbreaking — which likely led him to be reluctant to back someone so different from him.

Even amid the 2020 primary and general election, some Democrats dreamed of a knight in shining armor saving the party from a seemingly weak field of candidates. First, Hillary Clinton considered entering the race. Worried opponents of Bernie Sanders floated Democratic Senator Sherrod Brown or Michelle Obama as possible nominees at a brokered convention. Even after Biden had clinched the nomination, a sizable sect calling themselves “Cuomosexuals” hoped that the New York Governor would assume the Democratic nomination. Aren’t we glad that didn’t happen?

From beginning to end, Biden has been underestimated by his party but perhaps most hurtfully, by his close friend. In Obama’s biography, “A Promised Land,” Biden comes off as un-presidential and is described as “happy to share whatever popped into his head” and not “always self-aware.” His positive attributes could apply to a number of dog breeds: “decent, honest, and loyal.”

The memes which immortalize the Biden/Obama bromance each follow the same formula. Biden wants to do something a little stupid, childish, or funny, Obama is amused and exasperated. Repeat. That version of Biden is pretty clearly in the past. The current version of Biden is fiery: “That’s a serious question, right? Is it acceptable to me? Come on.” or “You want to check my shape, let’s do push-ups together” when his age was questioned. The current version of Biden promised to be the second coming of FDR. Biden is no longer content to be the butt of the joke.

Both Obama and Biden entered the White House in the wake of an unpopular Republican president, with a Democratic trifecta, and facing a massive crisis. According to the Ezra Klein Show, “the 2009 stimulus was 5.6 percent of the G.D.P. in 2008. The Rescue Plan this year is 9.1 percent of last year’s G.D.P.” When Biden initially proposed his $1.9 trillion plan, media pundits and analysts expected that the size of the bill was a negotiating tactic that aimed high to hit low. However, when the dust settled, the price tag was almost the same.

While the $15 minimum wage and paid family leave were dropped, Bernie Sanders still thinks that the bill “was the single most significant piece of legislation for working-class people that has been passed since the 1960s.” Although the full effects of the bill remain unclear, Biden managed to secure a major expansion of Democratic priorities without much of a fight.

A large reason for Biden’s success in comparison to Obama’s is circumstantial. In 2008, the prevailing economic wisdom was that too large a stimulus would cause inflation. Back then, the size of the stimulus was being thought of in entirely different terms: in the hundreds of billions instead of the trillions. Overall, America has spent upwards of $5 trillion for economic stimulus during Covid. When economic advisors asked for a package of a trillion dollars, Obama’s Chief of Staff, Rahm Emanuel said “There’s no fucking way”(A Promised Land). People like Paul Krugman who protested that the stimulus was too small proved prescient. The economy got back on track but too slowly, so that Democrats got shellacked in the 2010 midterms.

Today, Democrats have the benefit of hindsight and are determined for history not to repeat. Despite having 57 Senators to Biden’s current 50, Obama still maintains that the $800 billion stimulus was the largest possible. Well, it wasn’t good enough for America or the Democratic party.

Now, we have to consider the possibility that Biden is a better politician than Obama, or at least better suited to navigate the current political moment of high polarization. Andrew Yang remarked that “The magic of Joe Biden is that everything he does becomes the new reasonable.” Even when Biden refuses to bend to Republican senators and rejects a bipartisan deal, his Chief of Staff Ron Klain takes the heat from Susan Collins instead of him. By being pushed by Joe Manchin, Biden can say to progressives, “Wasn’t me,” show Biden-Republicans that he truly is moderate, and keep the majority of the bill intact.

After years of character metamorphoses that continually resulted in him falling short of the highest office, Biden has finally found his stride and seems poised to be a transformational president. Although he will continually disappoint moderates and progressives, Biden has the potential to guide the country in a more just, equal, and better direction.