Migrant conflict on the Belarus-Poland border

What's happening on the Belarus-Poland border where thousands of migrants are stuck? 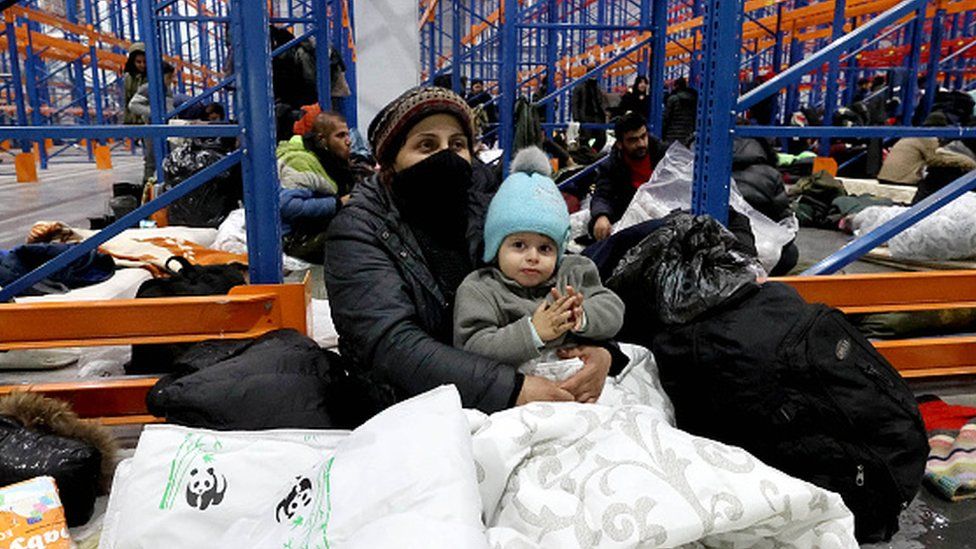 Since summer, thousands of migrants from the Middle East and Africa have been trying to cross the Belarus-Poland border. The majority want to get to Germany through Poland, but EU countries refuse to accept them and accuse Belarussian authorities of organizing the arrival of illegal migrants.

On November 8, the situation got worse when migrants tried to cross the border by force. Some of the videos showed people trying to cut barbed wire or break fences with spades. To stop them, Polish border guards used teargas. After that, around 2,000 people, including children, stayed in the forest near the border.

On November 16, the conflict worsened even more: migrants started throwing stones and other objects at the Polish forces, who responded with water cannons and tear gas. Belarussian guards didn’t try to stop refugees.

Moreover, Poland’s Ministry of Defence accused Belarus of giving migrants stun grenades and other tools to cross the border. Alexander Lukashenko, the disputed president of Belarus, stated that Poland used toxic chemicals against refugees and violated the state border by attacking them.

Belarus proposed a plan: Germany would create a humanitarian corridor for refugees staying near the border. And if they were willing, Belarus would send 5,000 migrants (who were not near the border but in Minsk, the capital of Belarus) home. Germany rejected the idea. Around 400 people agreed to leave the country, but the majority of refugees stayed in Belarus.

Lukashenko criticized the EU for being reluctant to solve the problem and Poland for violating international rules of asylum by returning people who crossed the border back.

The EU accused Lukashenko of luring migrants to the border and pushing them to cross it in response to sanctions imposed after the elections of 2020 and violence against the opposition. Austrian Chancellor Alexander Schallenberg said: "The EU must not give in to blackmail from Lukashenko. We have to respond united and very clearly to this state-sponsored hybrid attack on the European Union.” Both sides rejected accusations. Soon, the EU announced a plan for new sanctions.

In a few days, the camp near the border, where migrants were staying, was emptied. People were transferred to a warehouse. One of the main reasons was low temperatures. The living conditions are still poor: there is not enough food and water; people sleep on the floor. Polish Defence Minister Mariusz Blaszczak stated: "We have to prepare for the fact that the situation on the Polish-Belarusian border will not be resolved quickly."

Is Belarus using migrants as part of a ‘hybrid war’ against the EU? (euronews)

Belarus clears migrant camps at EU border, but crisis not yet over (Reuters)