Ministry for the Future

A master of science fiction charts an optimistic and terrifying path for the global warming crisis. 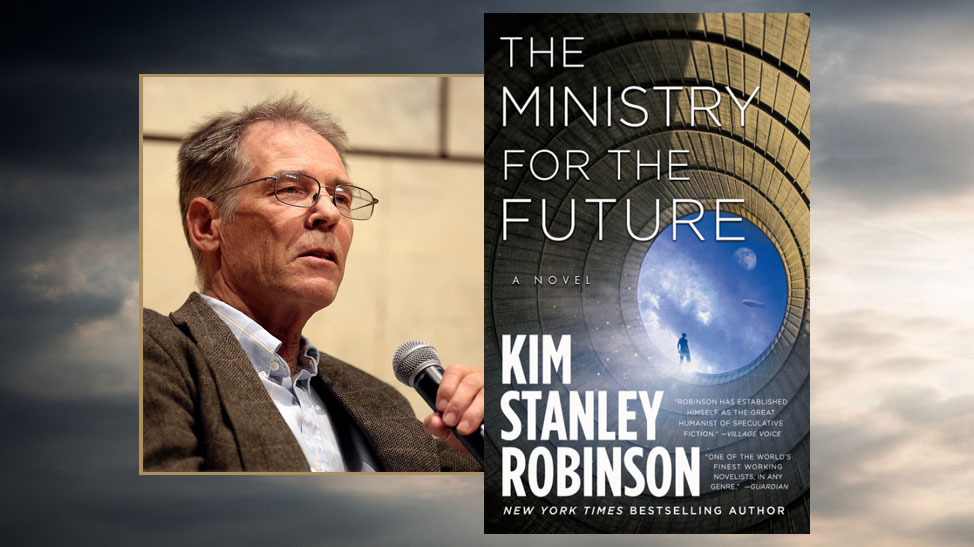 The Ministry for the Future by Kim Stanley Robinson opens mundanely: the setting could be anywhere hot (Arizona perhaps) until the temperature keeps on rising and the chapter begins to read like horror. Frank, a young aid-worker, submerges himself in a lake along with the rest of the town in a desperate attempt to survive. When he is pulled out of the water on page 12, every other person in the lake is dead along with 20 million other Indians caught in the nation-wide heatwave. Thus begins a novel that grabs the reader by the shirt and shouts, “Look at what will happen! This is what we must do.”

Because of his severe post-traumatic stress, Frank views himself as dying that day and being reborn — finding purpose only in fighting for the salvation of the climate by any means necessary. India itself undergoes a sort of rebirth, casting off old corrupt parties and creating a new one to fight climate change, consisting of all castes and types of Indians. That an underdeveloped, massive country can do this is remarkable. India is forced to forgo the immense burning of coal that propelled the United States and countries like it to their current stage of development, even while those that have already reaped the benefits of fossil fuel emissions continue to live extravagantly. But Robinson is careful not to argue that change can only come through direct pain and trauma; in fact, it must not. By the time that happens, the world will be uninhabitable and hundreds of millions of humans and other animals will have perished.

Robinson explains a major barrier to collective action on climate change: “A universal cognitive disability, in that people had a very hard time imagining that catastrophe could happen to them, until it did. So until the climate was actually killing them, people had a tendency to deny it could happen”(The Ministry for the Future, 350). Eventually, the entire city of Los Angeles is submerged by an atmospheric river and although few die, the cost of rebuilding the city will be astronomical. Finally, the world is put on watch: even the most developed and rich countries will be affected.

We are introduced to another main character by way of kidnapping. Frank holds Mary, the head of the Ministry for the Future which is an international organization that exists to protect future humans and the planet, hostage to convince her that she is not doing enough. And so begins a long and fruitful friendship. Eventually convinced, Mary requests her second in command, Badim, to explore opening a black wing for the ministry to commit illegal activities that would aid their cause. He replies that there might already be one in existence.

At the onset, the Ministry for the Future is an underfunded, disrespected organization. Despite the desire for global governing bodies that would dole out unbiased truth and justice in the wake of the second world war, power still rests in the hands of the most powerful nations. Mary relentlessly petitions the leaders of the biggest national banks in the world to embrace a “carbon coin” that will create incentives to preserve civilization: “A new currency of their own collaboration, based on carbon sequestration, and exchangeable on currency exchanges; money like other money but backed by the central banks working together, and securitized by the creation of really long-term bonds, bonds with a century pay-out at a guaranteed rate of return large enough to tempt anyone interested in fiscal stability. In essence, as she had been saying, creating a way to invest in survival, to go long on civilization, as opposed to the many ingenious ways that finance had found to short civilization.” (The Ministry for the Future, 288).

Along with Stockholm Syndrome, Robinson introduces another: “[Götterdämmerung Syndrome] is often interpreted as an example of narcissistic rage. Those who feel it are usually privileged and entitled, and they become extremely angry when their privileges and sense of entitlement are being taken away. If then their choice gets reduced to admitting they are in error or destroying the world, a reduction they often feel to be the case, the obvious choice for them is to destroy the world; for they cannot admit they have ever erred.”(The Ministry for the Future, 298). Götterdämmerung capitalism is self-explanatory.

Money and changing the way that capital works will move the world. The problem is that capitalism will fight relentlessly to survive: “Easier to imagine the end of the world than the end of capitalism: the old saying had grown teeth and was taking on a literal, vicious accuracy” (The Ministry for the Future, 25). Eventually, the bankers realize that the end of the world is coming and change policies to prevent the collapse of the banks. Once the carbon coin is established and governments begin to invest in global warming solutions, everything changes.

Money incentivizes Midwestern townspeople to relinquish their land for the Half-Earth Project, which is building habitat corridors for animals to migrate with the eventual goal of sectioning off half of the earth for non-humans. Greedy oil executives calculate that they will make more by keeping the oil in the ground and collecting carbon coins. Eventually, as the economy begins to break down under the weight of capitalism, socialism becomes a necessary Plan B, which Robinson simplifies and defangs to mean: “public ownership of the necessities, and real political representation”(The Ministry for the Future, 410).

Robinson explores eco-terrorism with great nuance, causing the reader to feel sympathy for the terrorist organization, the Children of Kali. They emerge in an era of new warfare and use creative means to persuade people away from carbon-emitting activities. They kill oil executives and the worst individual offenders. But they also hold Davos hostage for a week and try to “re-educate” them. To dissuade people from flying, they down private jetliners. To stop people from eating beef, they introduce mad cow disease to millions of cows using drone darts. Power plants around the world are destroyed. Their actions are largely successful on the psyche of the world. Most of our wasteful luxuries are now easily replaced by new technologies and it becomes more convenient and comfortable for humans to make the switch.

The characters often explicitly raise the question: Who is the real terrorist here? The eco-terrorists often make sure to leave innocents unharmed. The actions of their targets will likely kill hundreds of millions of humans and other animals — the only reason that these people are not tried and punished for their crimes is that many of the victims exist in the future.

Of course, not all world-saving solutions are political or social. A scientific solution prevents destructive sea-level rising. Glaciers are rapidly melting and their meltwater is lubricating the bedrock below the ice, reducing the friction and causing them to slide into the ocean. If massive glaciers in Antarctica and around the world enter the oceans, the sea level rise would be devastating to any human settlement near water. One storyline tendril follows a group of researchers who pioneer a new approach that will pump water from below the glaciers and perpetuate the friction.

In an era of fear-mongering about the gates of hell-opening, Robinson is realistically optimistic. There is an achievable path to defeating climate change, but it will be one of the brightest timelines. Robinson explores a world in which after only one truly great climate catastrophe, the world embarks on a desperate mission — transforming the economy, wealth distribution, and lifestyle to save the plant]et.

The narrative often switches away from a traditional story about Mary, Frank, or the various auxiliary characters. Some chapters form riddles that begin with “I am” and whose answers include the sun, capitalism, and a photon. Sometimes there is a debate between two disembodied voices. A notable one goes like this:

“There is no single solution adequate to the task.

And so what can we expect to see?

But assuming success, just for discussion’s sake, what shape might that take?

The shape of failure.

Expand on that please?

A success made of failures?

Yes. A cobbling-together from less-than-satisfactory parts. A slurry, a bricolage. An unholy mess.” (The Ministry for the Future, 505).

The Ministry for the Future is a call to arms to lawmakers, scientists, possibly terrorists (just kidding), and the newest generation of humans who might save the world. Let us start building our own collage of failures, each one a step closer to success.