NASA's Perseverance Mission: What is it? and Why?

High-tech and searching for life on Mars. 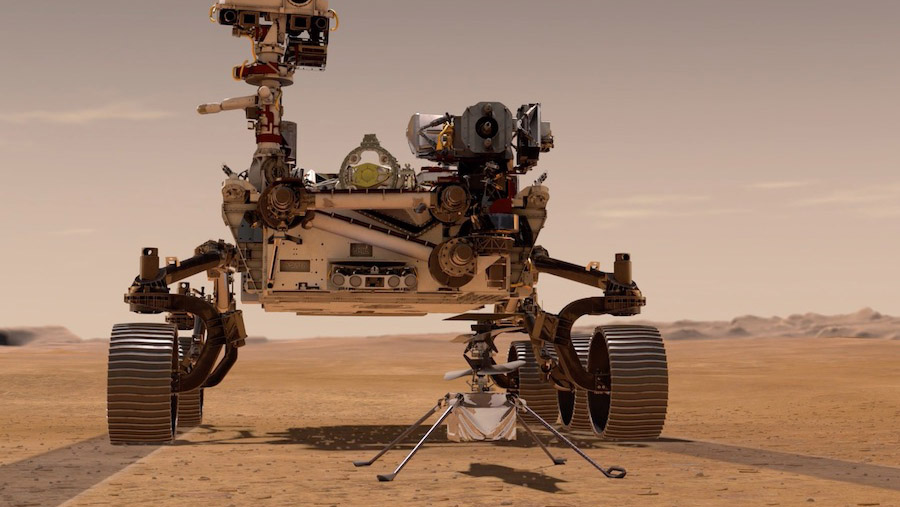 On February 18th 2021, a small rover landed on its forever home, destined to roam its lands for years to come. That small rover is named Perseverance, NASA’s newest rover made to collect data and information on the planet of Mars. A technological marvel, the rover is equipped with a plethora of cameras, tools, and other machines which will be used to deepen our understanding of this red planet.

However, there is a larger goal at hand. Like in its previous mission, with its Curiosity rover in 2012, NASA wants to find evidence of past life on Mars. Although Curiosity never found direct evidence of that, it did increase our understanding of a once habitable environment. Mars features river channels and deltas across its surface that indicate there once was flowing water on the planet. Evidence of ice at the poles only reinforces that idea. With Perseverance, NASA hopes to now find evidence of life amongst that ancient watery surface, perhaps showing us that humans could eventually call Mars home.

But how will Perseverance reach that goal? The rover is equipped with a handful of state-of-the-art tools. On top of the rover is a “Super Cam”, a high fidelity camera that will be used to take pictures of Mars. In addition, the camera has laser scan capabilities that can “vaporize rock and reflect back information about its composition and chemical makeup”(National Geographic). On the side of the rover is a module called MOXIE. MOXIE is a machine that aims to convert Martian atmospheric CO2 to oxygen using heat and electricity. If possible, humans might be able to breathe on Mars without importing oxygen, or even in the longterm convert Mars’s atmosphere to one like Earth’s. Another module next to MOXIE called RIMFAX will be used to send radar waves deep underground up to 30 feet. This information can then be converted to 3D imaging which could help identify pockets of ice or water (NG). However, the most intricate section of the rover is in its sampling arm attached to the main body. This arm’s main purpose is to collect rock or other material samples from the Martian surface. The three main components on the arm are PIXL, the main drill, and SHERLOC. The job of PIXL is to pick up chemical traces of potential fossils using X-ray fluorescence at night (NG). If fossils were found, it would explicitly point to past life on Mars. The job of SHERLOC is to “detect and map minerals that might be useful”(NG) using magnifying cameras and lasers. Lastly, the drill will dig up samples that will be automatically collected into compact tubes.

All of this sounds fine and dandy, but how will the samples collected on Mars be useful to us on Earth if they’re stuck on Mars? Well, NASA has a plan. The samples will be deposited on the rover in a specific spot on the surface, where a few years later a European Space Agency fetch rover will arrive and collect the samples to be returned back to earth.

The most unique and innovative part of the rover is a wholly separate experiment known as Ingenuity. Ingenuity is actually a small helicopter attached to the rover. You might ask, why a small helicopter? Well, NASA is actually attempting to understand how flight could happen on a planet like Mars with its lower gravity, thinner atmosphere, and freezing temperatures. The nature of this experiment is incredibly interesting: it's a question that few have asked and yet many now want the answer to.

To adapt to the Martian environment, the design of the helicopter had to be different than normal. Due to the thinner air, the blade must run at a much higher speed than a helicopter from home to generate lift. NASA had to out-source parts that would handle such speed. Powered by a cell-phone microchip, linux software, and off the shelf hardware, the helicopter is expected to fly autonomously, untethered to planet Earth. Due to the distance between Earth and Mars, direct communication between the two planets is impossible and so the helicopter must do its tests independently. However, autonomous does not mean alone. NASA will determine take-off sites for the copter as well as the flight paths, and will schedule three to four flights. The flights however, will not be long distance: NASA wants to remain in control of the flight area to reduce the chance of losing the aircraft. The copter will take off, fly, and land where it took-off from.

There is still much to learn from Mars. But it seems the eternal question remains: will humanity one day call it home? Elon Musk thinks so. Let’s hope so.