Westerners are beginning to take notice of this psychedelic. 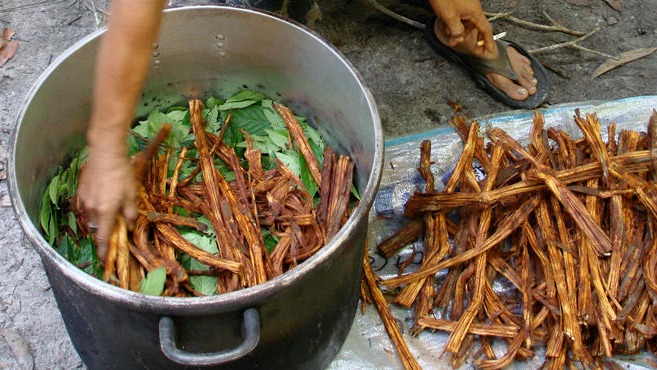 For many generations, native groups in the Amazon jungle have depended on ayahuasca. This psychoactive plant is commonly turned into a tea and is a major pillar of identity for native people, who recognize its numerous spiritual and medicinal benefits. While its use is quite common and necessary in these native groups, ayahuasca has been used outside of this spiritual and medicinal context by westerners. This non-traditional western use of ayahuasca has led it to be criminalized as a harmful drug rather than being utilized as a medicinal plant. Though ayahuasca, like other drugs, has historically been demonized by the west, recently westerners have started to realize its value in spiritual and medicinal matters, specifically in offering eye-opening spiritual experiences and improving mental health.

Often, westerners remain ignorant in the historical and cultural contexts of indigenous drug use, and this ignorance results in the unfair demonization of important ritualistic plants such as ayahuasca. One example of this western ignorance is evident in the demonization of poppies. Before the colonization of the Americas, poppies were used as a medicinal plant and were involved in psychoactive plant rituals by geographically western Native American tribes. However, post-colonization, the sacredness of the poppy was destroyed when it was transformed into drugs such as heroin and opium and used in a non-traditional way by westerners. Though poppies were once an important ritualistic plant, they are now associated with “addicts and soaring HIV rates as the virus spreads through shared heroin needles” (Steinberg et al. 4). This demonization is seen with plants from the Amazon too, with coca and ayahuasca being prime examples. Ayahuasca is traditionally used by many native groups of the Amazon for its medicinal and spiritual properties. Wade Davis writes in One River that the native “world had many layers, all of them inhabited by people, animals, and spirits” (196). Consumption of ayahuasca allowed individuals to travel between and interact with these many world layers, making it a very crucial part of their knowledge, traditions, and identities. However, some westerners use this drug recreationally without understanding and respecting the cultural traditions behind it. As with other drugs, western use of ayahuasca has damaged the sacredness of the plant, leading it to become demonized by the government and society as a whole. While generations of natives have depended on ayahuasca for spiritual guidance and have gathered knowledge showcasing its medicinal values, the west has categorized it as a harmful and dangerous drug without realizing many of its benefits.

However, while the west has traditionally demonized ayahuasca, recent activities may mark a shift towards a more ayahuasca-accepting culture. The digital age and COVID-19 crisis have exacerbated the mental wellbeing of many, making ayahuasca a topic of interest for medicinal and spiritual treatments. One such treatment, ayahuasca tourism, encourages western tourists to travel to ayahuasca retreats in South America to gain the experience of “traditional” ayahuasca treatment. Largely inspired by the Beat Generation — a group of 1950s activists who took ayahuasca —  ayahuasca tourism has rapidly grown in recent years, and even expanded into the United States (Kavenská and Simonová). Though ayahuasca is illegal in the United States, its consumption is allowed in a religious context under the American Indian Religious Freedom Act of 1978. This act, and the growing demand for ayahuasca treatments, prompted the creation of “ayahuasca churches” nationwide, further demonstrating the increased interest in this plant (Fraser). Overall, though the desire for spiritual ayahuasca treatment has spiked in recent years, a lot of questions should be raised about the morality and ethics behind these “traditional” treatments performed for-profit and outside of their ancestral origins.

This shift towards a more ayahuasca-accepting western culture has also prompted much scientific interest: researchers are interested in learning about its many medicinal qualities and possible side effects. One such study, by Jiménez-Garrido et al. in 2020, aimed to determine ayahuasca’s effect on mental health. In this experiment, researchers analyzed the mental state of individuals before and after taking ayahuasca for the first time. The results of this study were shocking. 18 of the 40 participants who had never taken ayahuasca before were diagnosed with some form of mental illness prior to the study (with depression, addiction, and anxiety being the most common). One month after taking ayahuasca for the first time, 11 of these 18 participants were no longer diagnosable for their previous mental conditions while the other seven participants showed some to no improvement. Six months after taking ayahuasca, only two participants retained their original symptoms of mental illness (Jiménez-Garrido et al. 2020). These results suggest that ayahuasca treatments can be extremely successful in combating mental health disorders, and more research should be done to further explore ayahuasca’s efficacy as a treatment option. In addition, studies such as this one show that westerners may be becoming more open-minded and can look towards other cultures for solutions to current day problems such as the mental health crisis. All in all, this study not only exemplifies the current growing cultural interest in medicinal drugs like ayahuasca, but it also provides possible avenues for future ayahuasca use and treatment.

In conclusion, though the west has been historically intolerant of native psychoactive drugs, recent markers, such as the growing desire for ayahuasca tourism and increasing scientific interest in the medicinal qualities of these drugs, suggest that the west may be growing more accommodating. Westerners have realized that these plants may be able to solve difficult problems in western society, such as improving mental and spiritual health in the COVID-19 crisis and digital age. However, though this plant has the potential to benefit the west in many ways, certain ethical issues must be addressed. One issue that should be thought about is if it is ethical to use this native plant for western profit, even if it heals people in the process. It is also important that westerners can fully appreciate the plant and understand the surrounding traditions without appropriating native culture. These are just a few of the potential problems associated with western ayahuasca use, and there are certainly other moral issues that were not addressed that are also important. Overall, though ayahuasca may become more integrated into western society in the near future, it is essential that native voices are heard and their traditions are respected in the process.