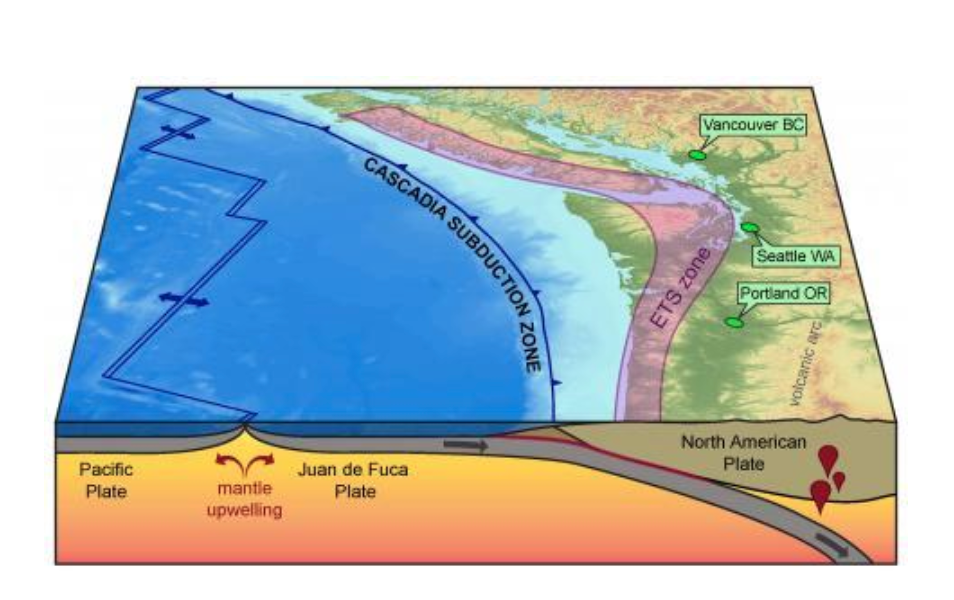 Living in this era of human development is something to be appreciative of. Nowadays, technology can accurately predict the weather. That being said, there are other types of natural occurrences that can go undetected until they strike, the prime example being earthquakes, which have the potential to be very destructive and can happen in places where they are least expected, such as off the coast of Cascadia.

The Cascadia Subduction Zone is a fault line about 70 to 100 miles off of the Pacific coast. It is created by the Juan De Fuca tectonic plate, a microplate that is only about 300 miles in length. Subduction is the result of two tectonic plates converging. The fault lays directly on the infamous “Ring of Fire”, a region encompassing much of the coastal area around the Pacific Ocean where a large amount of the world’s volcanic eruptions and earthquakes occur. Many devastating natural disasters along this region have resulted from the plates bordering the Pacific plate. These events have caused great damage, like the 2011 Japan tsunami, which was the result of an earthquake off the coast of Japan.

The main basis for this prediction is evidence from the past. On the night of January 26, 1700, a tsunami hit Japan, completely wrecking a wide array of coastal towns. While not uncommon for a country that has many volcanoes and frequent earthquakes, there was a strange factor regarding this tsunami. Usually, the authorities are tipped off by earthquakes occurring in and around the ocean, and so, Japanese residents residing near coastal towns use the feeling of an earthquake as an indicator to flee before a tsunami comes. However, in this case, there was no shaking felt whatsoever.

Citing the Cascadia subduction zone as the reason for this tsunami seems to be the general consensus. Researchers found out that around 1700, many trees located in Cascadia had died in the winter from an apparent coastline drop. The conclusion drawn from this is that there was a giant earthquake, the evidence being a large area of dead trees, which would have died because of the earthquake. This large earthquake would cause tsunamis that would reach Japan; a major earthquake in this area could not only be detrimental to the Cascadia region but also to Japan once again (NOAA).

The risk of another earthquake occurring as a result of this fault is seemingly unlikely for the near future. Geological evidence indicates that major earthquakes similar to the one in January of the year 1700 have occurred 7 times in the past 3,500 years. Between each earthquake, there is a 400 to 600-year gap where no major events occur. Given that the last megathrust earthquake happened in 1700, or 321 years ago, there should be a state of relative tranquility surrounding the fault for at least the next few decades. (PNSN) For a region where earthquakes are not a major concern, it pays off to be well-prepared, even if the risk is small. The Oregon Office of Emergency Management has information regarding earthquake preparedness, which is recommended for everyone living in Cascadia.