Soldiers fought for a nation that did not fight for them. 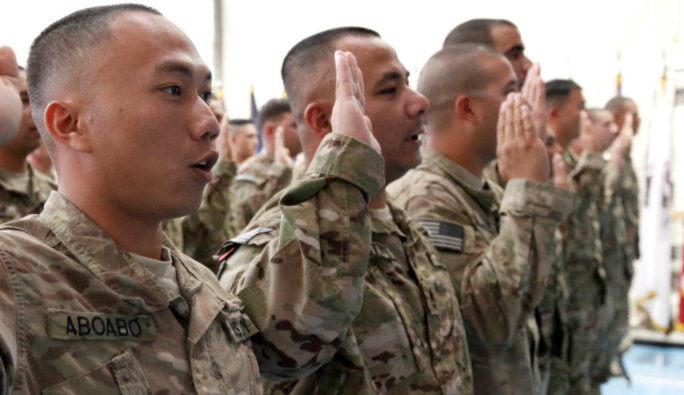 Every year, thousands of non-citizens enter the military and contribute to the hard-working, selfless, and brave identity of our country. While often forgotten and undervalued, immigrants are and have been a crucial part of the United States Armed Forces, serving in every armed conflict in the nation's history. ‍

Specifically, the current state of immigration policy persists as a roadblock for countless members of the armed forces; as it stands, our systems do not sufficiently repay these courageous individuals for their service. With a rapid amount of deported veterans leaving this country and the Trump Administration's campaign to halt numerous military immigration benefits, Biden's administration must decide whether or not it wishes to correct these errors.

Before 2017, numerous opportunities helped non-citizens to naturalize through service. The Military Accessions Vital to National Interest Recruitment Pilot Program (MANVI), a program that recruited legal non-immigrants into the army, and the Naturalization and Basic Training Initiative, a program that allowed noncitizens to naturalize after they complete their combat training, are two examples of benefits that currently exist in limbo. Additionally, the Trump administration has also restricted service members from receiving Naturalization Honorable Service Certification after a 180 day period. Because of these closures and new requirements, hundreds of military immigrant enlistees have been discharged, leaving many without a path to naturalization or legal status in the country.

Along with this, Judge Advocate General (JAG) attorneys, more commonly referred to as military lawyers, have not extended their scope of representation beyond the basics of immigration law and naturalization. Therefore, many non-citizens within the military affected by these policy changes have been unable to receive the proper legal representation they deserve. The consequences of these changes often result in drastic outcomes - for example, deportation.

In 2010, Andrew De León, an army veteran living in the United States, was removed for a nonviolent drug offense; despite his prolonged service, De León was not naturalized and was subject to deportation. After years of attempting to re-enter the United States, he was able to cross the Tijuana border earlier this month with the help of Attorney Ian Seruelo. De León’s story is, unfortunately, not a unique case. According to the U.S. Government Accountability Office’s report in 2019, ICE “did not consistently follow its policies involving veterans who were placed in removal proceedings.” In the same report, it was found that hundreds of veteran immigrants were deported between 2013 and 2018 with a 92% removal rate when placed in removal proceedings.

Recently, lawmakers and the U.S. Department of Homeland Security have made numerous statements on ending the immigrant veteran crisis. Shortly before the July 4th holiday, the DHS announced an initiative to support non-citizen service members, veterans, and their families. "We are committed to bringing back military service members, veterans, and their immediate family members who were unjustly removed and ensuring they receive the benefits to which they may be entitled," said Secretary of Homeland Security Alejandro N. Mayorkas in his July 2nd press statement. Congress representatives have also made recent attempts to reach out to immigrant veterans with the introduction of acts such as the "Repatriate Our Patriots Act," introduced by Congressman Vicente Gonzalez, and the efforts of senators such as Sen. Tammy Duckworth, an Army veteran who has recently been pushing for immigration reform within the armed forces.

Discussions about how to fix the imperative immigrant veteran crisis have been brought to light in recent times, however little to no action or change has been done since the end of Trump's era of stagnant and inactive aid for immigration. Unless new legislation or administrative regulations pass, non-citizen veterans and service members will continually face hardship and risk having their livelihoods being taken away, despite their courageous service to this nation.