How the Uighurs are being systematically suppressed. 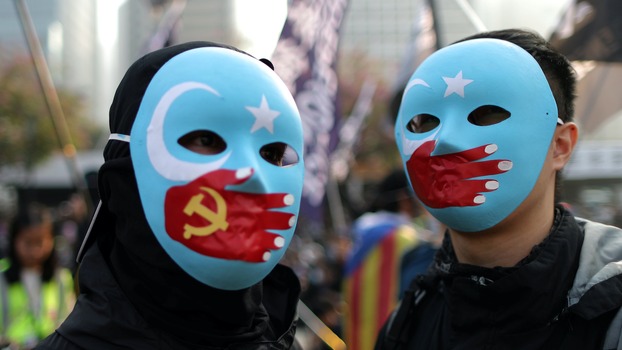 Protest against the systematic oppression of Uighurs

The idea of a dystopian society is not entirely unfamiliar to us. Countless times in literature and motion entertainment have we read about and seen these fictional dystopian societies. We dread them, and at times release a sigh of relief that we are not in that version of the world yet. However, we let one key thing slip off of our minds, the fact that dystopian societies do exist in our current world. Nowhere is this more evident than in the Xinjiang province in China, where more than a million native inhabitants have been kept in internment camps, solely because of their religion and ethnicity. Separated from their families, these people are effectively tortured and brainwashed in camps under the guise of “re-education”.

Specifically, people from the Uighur Muslim ethnicity are being abducted and isolated by the Jinping government. The Uighurs are a Turkic ethnic group originating in Central and Central-East Asia. Their culture is closely tied with Central Asian cultures. Recognized as natives of Xinjiang, Uighurs are officially acknowledged as one of China’s 55 ethnic Minorities. About 12.8 Million Uighurs live in Xinjiang, with the 2nd largest concentration being in Kazakhstan (about 2230).

Historically, the Chinese dynasties have always tried to exert their control over these lands and their natives, with the Qing Dynasty being the first in their westward expansions. In 1949, the second east Turkestan Republic (Modern-day Xinjiang) was absorbed into China, after much turmoil and friction. Between 1950-1970, the government of China introduced various policies aimed at suppressing the culture and religious identity of the Uighurs. At the same time, a mass, state-sponsored migration of Han Chinese to the area, was initiated. In 1997, Chinese police rounded up 30 Uighurs and killed them during Ramadan. This further fueled the animosity between the Uighurs and the Chinese Authorities. It was a giant tinderbox that only needed a kindle. This kindle came in the form of the 2009 Ürümqi riots, which left scores of Han Chinese as well as Uighurs injured. After the Ürümqi riots, the CCP doubled down on the “separatist argument”, using it to validate all of the cruelty that followed.

They made me wear what they called 'iron clothes,' a suit made of metal that weighed over 50 pounds/ It forced my arms and legs into an outstretched position. I couldn't move at all, and my back was in terrible pain...They made people wear this thing to break their spirits. After 12 hours, I became so soft, quiet and lawful -  An ex-detainee from one of these camps

Effectively, more than a thousand of these camps are maintained throughout China, with more than 1.5 million Uighurs being detained in them. This means that effectively, 1 out of every 6 Uighur adults is being detained. Oftentimes, these camps are disguised, listed as schools, hospitals, rehabilitation centres, and whatnot. Initially, the detainees are not tortured extensively. They are forced to watch propaganda all day and night, and over time, these smaller intimidation tactics ultimately snowball into horrible and inhumane torture, ranging from waterboarding to even electrocution. Forced labour is also rampant, with more than 80,000 Uighurs being used as forced labourers for over 30 companies, including large multinationals such as H&M, Nike, Amazon, and BMW.

The women detained in these camps suffer from systematic rape. In addition, forced sterilization is carried out in order to completely eradicate the Uighurs as an ethnic group. Moreover, detained children are brainwashed and re-educated to forget their roots and their religious identity. They are effectively taught to be like their Han counterparts. Many detainees have also reported that forced medical experimentation procedures are carried about on them, completely aggravating their status as scapegoats.

Life for Uighurs outside the camp is not much better either. Particularly after 2014, restrictions have been increased significantly. According to the Chinese government, signs of “religious extremism” include owning the Quran (the holy book of Muslims), growing a beard, hang a prayer rug, or quitting smoking or drinking (since alcohol consumption is Illegal in Islam, the CCP effectively targets “leaving alcohol” as a sign of extremism). Cameras have been installed in the homes of sovereign citizens. Almost all Uighurs have been face-scanned, along with having their biometrics collected. Also, their cars are loaded with tracking devices. All of these advanced technologies have been used extensively in hunting a certain group of people, who are said to allegedly show indirect signs of “extremism”. The government has also aggressively effectively tried to curb the diaspora of escaping Uighurs, reportedly including the launch of multiple cyber attacks on Uighurs living abroad.

The Uighur situation is more than a political or economic crisis. An entire ethnic group is being wiped out from the face of the Earth, just because of their religion and culture. Nothing can be a justification for separating a child from its mother, and blatantly mistreating a person just because of their theology and beliefs. This is utterly preposterous, and the world needs to come together to decide whether they will let tyranny prevail, or vanquish the cruel hands that continue shamelessly rock the cradle of every child from every innocent family, that they themselves have torn apart.