An account of one of the most destructive and important wars in recent history. 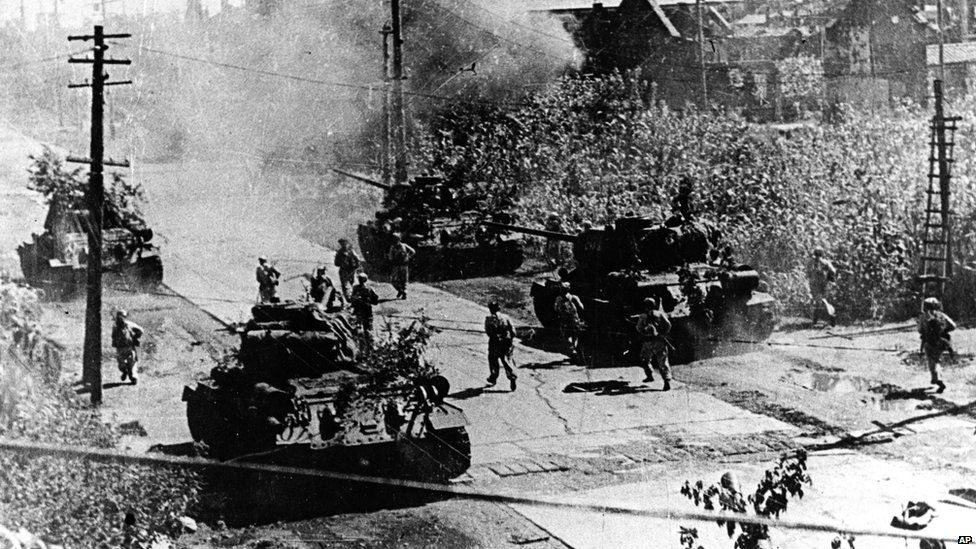 The Korean War was one of the deadliest military conflicts in the world after the Second World War, and it sealed the future of the Korean peninsula. On July 24, 1948, the capitalist South was named Republic of Korea (ROK) whereas the communist North was named Democratic People’s Republic of Korea (DPRK). This marked the division of Korea into two ideologically opposite parts. As we can see now, South Korea has become a very progressive and developed society whereas North Korea remains one of the most oppressed Stalinist societies in the world.

After the division of Korea into capitalist Pro-Western South and Communist North, the region became increasingly unstable and thus became a frontier of the fight between Communism and Capitalism. The United States, as the savior of the Capitalist World backed South Korea to stand against any Communist aggression from the North. South Korea was led by the notorious Dr. Syngman Rhee, whereas the Communists were headed by Kim II Sung (Grandfather of Kim Jung-un). The war was triggered by the invasion of South Korea by the Communist North on the 25th of June in 1950, and continued for three consecutive years.

‍The war occurred because of Soviet influence, as many sources confirm that the USSR gave the go-ahead to Kim for attacking the South. The US reinforcements in South Korea were being pulled off to US-occupied Japan, and this opened the chance for a successful invasion. North Korea had long wanted to reunite the Korean peninsula under a combined Communist nation, and this was their opportunity to do so. The USSR assured Kim that the US wouldn’t get involved. Thus, KPA (Korean People’s Army) forces attacked the ROK forces. However, an unexpected thing happened; the US intervened because President Harry. S. Truman thought that this war was to be fought as it was a challenge to the free world. The struggle then intensified as UN forces landed in the peninsula starting the three-year war.

The South had the protection of the capitalist world whereas the North had the backing of the Communist China under Mao. In the first days of the war, it was easy for the Communists. They overran the whole of South Korea in a matter of days. Nevertheless, as soon as the so-called ‘United Nations’ forces had arrived, the North Koreans had to retreat. Due to General Mac Arthur’s decisive Inchon stroke, the resistance of the North Koreans collapsed, thus, they had to retreat. They retreated as far as the Northern side of the 37th Parallel (The line that divided South  and North Korea). The UN forces occupied North Korea, but the Chinese became the savior of the North and poured into the North with more than 200,000 soldiers pushing the UN forces back to the other side of the 37th parallel i.e. South Korea. The Chinese Communist forces were very underrated by their opponents, as they possessed factually no heavy weaponry such as artillery; while the UN forces possessed absolute command of the air and sea, along with heavy artillery and tanks. The Chinese chiefly depended on small conventional arms but produced a huge mental and physical surge on the UN forces, consequently throwing them out of North Korea.

There were five Chinese armies in North Korea, whereas the UN only possessed one army there, namely the US Eighth Army along with the British 27th Infantry Brigade. The Chinese morale was high as these forces were pure Communists coming out of the PLA school (People’s Liberation Army,) and most of these soldiers had been fighting since they were teens. On the other hand, the UN forces did not have such high morale as they had no connection with this unknown peninsula, they simply wanted to go home. The US Supreme Commander of the UN forces, General Douglas MacArthur, was reluctant about taking the Chinese as a serious threat. The Chinese warned him several times before invading the North but he paid no heed, thus he took no precautions. As many post war researchers show, the Chinese wouldn’t have intervened if Mac Arthurs’s forces had not headed for Yalu (A very important industrial area of the then Communist China.) Yalu was very precious for China as it had some of the most important military factories there.

The US Administration tried to stop this offensive towards Yalu, but General Mac Arthur was confident and thus drove for Yalu, starting a bloody conflict. The Chinese attacked and cleared his misconceptions that Communist peasant armies were good for nothing. The Chinese fought bravely, showing their enemies that they were willing to do everything to drive the Westerners out. The peasant-filled Chinese armies threw the UN forces, along with the British from their feet and ousting them from North Korea. The Chinese then occupied some parts of the South as well. Nevertheless, the UN forces kept on fighting and did a great job of pushing out the Chinese back to North Korea. The two sides kept fighting around the borders of the two Koreas but none overran the other, causing a battle of attrition. The successes of the UN forces were chiefly due to their increased morale and partly for the commandeering of Lt. Gen Ridgway, who succeeded General MacArthur as the Supreme Commander. Mac Arthur was replaced by Ridgway because of his unprecedented wish to extend the conflict and his overwhelming criticism of the administration. A costly stalemate was produced for both of the belligerent forces.

The struggle continued for more than 2 years on the same front (the 37th parallel). The fighting was ended on July 27, 1953 by a series of agreements ending the three-year war. The total war caused about 1.9 million casualties (the largest since WW2 till now) and 800,000 fatalities. The US forces had 142,000 casualties whereas China itself suffered a few hundred thousand casualties. It really was a bloody war. However, gladly it came to an end in three years as otherwise people thought the Third World War could have started.

This war was the first battlefield between Capitalism and Communism. It was the first proxy war of the Cold War. The Korean War opened the eyes of Western powers about the capability of the peasant Communist forces and henceforth warned the capitalist world of the coming Communist threat.