The Republican party bows to Trump once again. 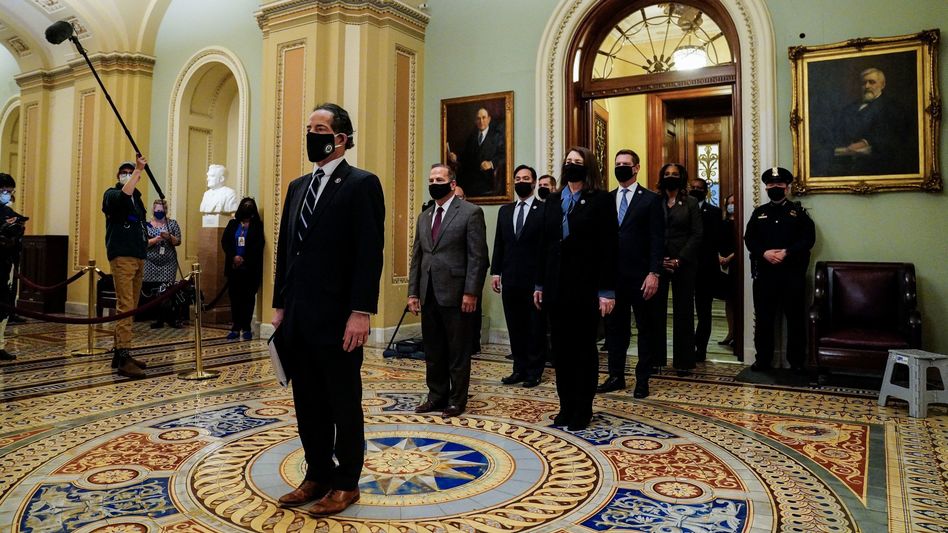 Americans will remember this February 2nd as the day that President Donald Trump’s impeachment was ten votes short of conviction. In the end, everything was over in a matter of minutes. With the matter already decided, House impeachment managers decided not to call witnesses and a simple vote revealed the unsurprising result. 57 Guilty to 43 Not guilty. Trump Acquitted.

Seven Republicans joined with all Democrats and Independents to create the most bipartisan support in favor of conviction in American history. For the public, impeachment was a starkly partisan affair in which 84.3% of Democrats and 9.0% of Republicans supported conviction. That political reality constrained how Republicans could “vote their conscience” without facing severe consequences from their party. According to a Vox and Data for Progress poll, “69% of Republicans said they’d be less likely to vote for a political candidate if that person found Trump guilty in the trial.”

The tension between party elites and base voters is personified by Senate minority leader Mitch McConnell, who is the de-facto leader of the party until Trump decides to return from Mar-a-Lago. In his statement justifying his vote for acquittal, McConnell primarily pointed to jurisdiction and the fact that impeachment has historically been used to remove presidents from office. Trump, of course, is already out of office. That echoed an argument from Trump’s lawyers, who argued that the trial was both too rushed and too slow: Democrats need to wait longer to give Trump due process but Democrats are too late to impeach because Trump has already left office. The reality is that Democrats wanted to remove Trump while he was in office but were stymied by a Senate recess that McConnell ordered.

Minutes after voting to acquit, McConnell released a harsh denouncement of Trump’s actions: “There is no question — none — that President Trump is practically and morally responsible for provoking the events of the day”(NYT). McConnell’s reasoning for his doublethink is that as a leader, he had a duty to represent the majority of his colleagues. The irony is that a leader also shapes the opinion of the people they lead: if McConnell had stuck with his beliefs and forcefully cast a vote for conviction, perhaps the majority of Republicans would have voted with him. McConnell’s numerous decisions to enable and support the president outweigh small statements, and are frankly puzzling given the gift-wrapped opportunity to purge a man who likely lost McConnell his position as majority leader and to shift the party in a new direction.

Given how close the final vote was, McConnell may have been able to give cover to ten Republicans who wanted to vote for impeachment. In fact, another Republican surprise defection, Richard Burr, justified his votes against the constitutionality of the trial but for conviction by saying “the Senate is an institution based on precedent, and given that the majority in the Senate voted to proceed with this trial, the question of constitutionality is now established precedent”(The Hill). Seven Republicans across the left-right spectrum voted to convict Trump. Some will survive Republican primaries by the sheer force of their popularity, some do not fear the consequences as they will exit politics soon, and others have presidential aspirations and are guessing that history will look back with derision upon the 43 Republican acquitters. All are making a risky gamble.

To those that voted to acquit Trump, I believe that there are some number who are like McConnell and believe that an impeachable offense was committed but are too scared to vote to convict. Every politician goes into politics to make a change, with a variety of underlying motivations. My question is this: What are you saving your political capital for? You came to Washington to make a difference and in one of the most important votes in American history, you decided to bow to the pressures of others? Really? What is the point of having power if you are always seeking to preserve or expand it at the cost of actually using it for something that matters?

There is something strange about watching a sacred and unusual event, whose outcome is almost certainly preordained. The trial became more of a reality TV show that politics is often derided as, than an actual proceeding. Senators from both parties asked extremely leading questions along the lines of “Given the fact that Trump is guilty/innocent, why does (insert event) indicate that Trump is guilty/innocent.” Trump’s lawyers substituted bluster and indignation for substance and failed to defend the indefensible.

The near impossibility of changing anyone’s mind led to a confusing mix-up in which House impeachment managers decided to call witnesses and then were reportedly pressured not to by Democratic Senate leadership. Both sides probably want to move on quickly from this saga and proceed into Biden’s term.

On January 6th, 2021, Donald Trump was the politically weakest that he has been in years. Through live video, every single American with a television could see with their own eyes the horror and desecration of the United States Capitol. A few contrarians wagged their fingers at the “dramatics” and “histrionics,” but the evidence was not hard to see or understand.

Those of us that see Donald Trump as an existential threat to America harbored real hope that his actions were finally beyond the pale. This event, we thought, was an atrocity that would  cause Republicans to abandon him. Of course, every single event before this failed to make him a pariah. Despite the shocking nature of this one, why should it be any different?