Will the rector appointments by President Erdogan be the end of Turkish educational progression? 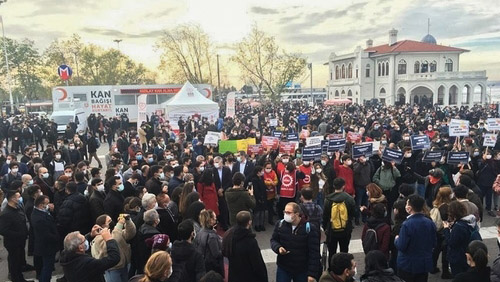 Note: The author asked to be anonymous for this article, because they feared retribution from the Turkish government.

With rapists being released and journalists being thrown into jail for criticizing the president, Turkey is hardly the epitome of justice. Most of us even thought that it couldn’t get any worse than this —  boy, were we wrong.

On January 1st, 5 rectors were appointed by President Erdogan, bypassing the democratic selection process. One of these 5 universities was Bogazici University, one of the most renowned and prestigious universities of Turkey with a history of 150 years. For context, a rector is similar to a dean in the United States, but while deans are in charge of a division or a faculty, rectors are in charge of the whole university. The rector appointed to this university was Prof. Dr. Melih Bulu, who ran for the President’s ruling Islamic party, Justice and Development Party (AKP), in the 2015 parliamentary elections. AKP is a right-wing conservative Islamic party that has been in power in Turkey since 2003.

On Monday, hundreds of students came together to protest the undemocratic process by which the rector was chosen, chanting “Not my rector” and "AKP, take your hands off our university".

Normally, there is an election from the members of the university’s faculty, and the names of the six people with the most number of votes are given to the Council of Higher Education. The Council then chooses three people from the list of names given and presents it to the President of Turkey, who then appoints the rector from this list. However, this democratic process was bypassed with the president appointing a rector of his own choosing without an election within the university faculty —  a first since 1980s military tutelage.

Appointing someone that the school faculty does not accept, which they perfectly made clear by turning their backs to the rectorate building, is an intolerable act within itself, not to mention that this person is affiliated with the ruling political party. It seems that the Turkish government's interference with non-political areas of life extends even to education. Those unfamiliar with the changes to education under the government may think the backlash is exaggerated —  after all, the new rector is an educated and arguably qualified candidate for the position. However, this is not the only time educational curriculums and processes were shaped under political and religious ideals. In the 2018-2019 school year, events involving the founders of the Turkish Republic were removed, being replaced with Islamic figures, and a significant increase in religious content took place. Even evolution was removed from the curriculum, as it contradicted how the Quran described the beginning of life. These radical changes were an attempt to gradually put an end to the secular education system, which was one of Mustafa Kemal Ataturk’s biggest achievements in reaching his ultimate goal of bringing the Turkish republic to the level of Western civilizations. Keeping the attempts to use education as a propaganda tool in mind, the reactions of Bogazici students, alumni, and the rest of the country are hardly dramatic.

But is Prof. Dr. Melih Bulu an awful candidate to be a rector? Of course not. He completed his Bachelor’s degree at Middle East Technical University (ODTU), another one of Turkey’s most successful schools, followed by a Master’s degree and a doctorate in Bogazici University itself. Then why are Bogazici students and alumni outraged at the prospect of another Bogazici graduate acclaiming rectorship? We should look at the culture to answer that question. First of all, for the Bogazici network, one can only truly be a “Bogazicili” if they completed their Bachelor’s there. As an ODTU graduate, Bulu doesn’t fit this description and it is viewed as offensive that he keeps emphasizing his years at Bogazici to justify the President’s decision in appointing him as rector. Second, he is not a part of the academia. In fact, it is the first time since the 1980s military tutelage that a rector has been appointed outside the Bogazici University faculty. The academia made it clear that they took this act as an insult when they turned their backs to the rectorship building during the handover ceremony. Last but not least, the new rector has a known affiliation to President Erdogan’s ruling party. Although we have yet to know whether and how Bulu will use this connection in his new position, his political ties pose a clear threat to the school’s autonomy and academic freedom.

Is it too much to ask that Turkish universities should be allowed to follow their own democratic guidelines and preserve their right to act as autonomous institutions? When discussing this topic, my 16-year-old sister said to me: “Be thankful it is not a high school dropout appointed as a rector.” My immediate reaction was stating that cannot be done, but she followed up: “They can do whatever they want.” I had no answer to that.

One good thing that has come out of this, though, is that we now know that a generation of people who feel free to speak their minds and fight for what they believe in is rising. In the protests, 36 people were taken into custody - only one of them was a Bogazici student and the rest were all students from various universities. Maybe this was the final straw that led people to unite under a common goal. This might be exactly what we need to finally see a change.