Two Takes on the Israeli-Palestinian Conflict 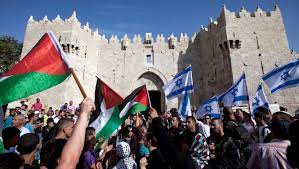 In light of some of the more recent events and conflict happening between Israel and Palestine, two Motus writers would like to share their opinion and take on said conflict. As one of the longest-running and most divisive conflicts currently ongoing, the Israeli-Palestinian conflict is not only an extremely important issue to solve but also a very delicate one. Read how our two authors explore two very different sides of the topic!

I’d like to start off this article by making my position clear that I fully believe and support the desire for Jewish people to have a state that is in part their own. However, the state of Israel in its current form is something I cannot and will not support. I believe that the Israeli state is participating in ethnic cleansing in an attempt to become an ethnostate and should, by all means, see some sort of punishment or rebuke from other nations. However, afraid of being called anti-Semitic, I have my doubts that any nation will do so with substance. It is by no means anti-Semitic to call out the ethnic cleansing and other horrible things Israel is doing and it is foolish of other nations to bend to Israel’s every will and demand.

Yes, I know that the history of the land Israel currently sits on has been disputed for centuries and centuries, and I don’t want to dive into the messy debate about who originally settled in the area. However this may pertain to the current issue I find as almost more of an excuse. So much of this history is just used as justification for whatever atrocities either side is committing. To be clear I totally believe atrocities and war crimes are being committed by both sides in the conflict and that there is no right side in this fight. Both sides are in the wrong.

That being said, I do believe that Israel is the primary perpetrator of these war crimes and is arguably more in the wrong. Israel undoubtedly being the country with far superior military forces, economic power, and international support should be held more liable for their crimes. Palestine has also committed many war crimes and atrocities but in my opinion has done so only in response to Israel’s overwhelming might. Of course that doesn’t make Palestine's war crimes any less criminal, it just means that they didn’t do them out of choice. Due to this they should be given special consideration when people learn and talk about this conflict.

The guerilla tactics employed by Hamas and other like-minded groups against Israel are their only way to somehow strike back against the oppressor, and because of the forced nature of their war crimes I believe they are less at fault.

Israel’s ethnic cleansing has gotten so bad that Holocaust survivors are distancing themselves from Israel.  The state-sponsored unlawful eviction and expulsion of Palestinians who have lived on this land for centuries that Israel participates in with the full support, or lack of criticism, from the global community should not be allowed to continue.

International leaders must call out Israel and its war crimes as there is no way forward in this conflict if both sides continue on with their attacks. Israel being the side I believe is more inclined to listen to the international community’s criticism could be the side to stop their aggression, leading to a possible opportunity for real, feasible talks on how to solve this conflict.

One can say many things about the oppression of Palestine, but one does not have to because of how simple this issue is in its cruelty, the obvious oppressor, and countless Palestinian lives that were lost or displaced. But the recent Israeli-Palestinian crisis and the reactions to it, have uncovered certain patterns in the way people perceive, talk about (or not), and frame this human rights crisis. This article will not attempt to ask the question of who to side with in this conflict or who is the true oppressor (because there are already numerous sources that describe and analyze the issue, pointing out Israel as the oppressor), but will try and discuss the aforementioned patterns of thought that display ignorance, bias, and lack of desire to educate oneself.

Disclaimer: this article is written by an author who is pro-Palestine and anti-Israel. However, the patterns talked about in this article will not be based on mere clutter and words, leaving you, the reader, to make conclusions about the evidence presented in this passage.

Pattern 1: calling this issue a conflict. This is not a conflict. The word “conflict” in its essence implies some sort of balance or equal footing between two sides. Because conflict suggests an escalation of a disagreement, there is an implicit idea that either one of the sides could “win” or solve the conflict in their favor. That is not the case with the Israeli oppression of Palestine. Even a simple look at the statistics of casualties of the recent crisis of May 2021 shows that there is a large imbalance within the powers of two pirates, with the number of Palestinian casualties equaling 256 killed, and Israeli casualties equaling 13 killed. These statistics are not meant to claim that Palestinian lives matter more, or that the 13 killed Israelis do not matter. They do. And everyone’s life matters equally. This is simply meant to show that the power balance is not equal because of the heavy funding and innovative military on the side of Israel, and limited resources and poverty on the side of Palestine. Therefore, the issue cannot be deemed a conflict.

Pattern 2: framing the issue and oppression around Hamas. Supporters of Israel and Zionists tend to make the issue appear as if it is revolving around the terrorist organization Hamas, and that Israel’s actions stem purely from the desire to protect Israelis from Hamas. A prominent example of such a pattern could be noticed in the words of the U.S. ambassador Nikki Haley at a Security Council meeting in June of 2018. After proposing a resolution of her own - which would label Hamas as a terrorist organization - against the resolution put forth by Kuwait - which would condemn the actions of Israel for “excessive, disproportionate and indiscriminate force” against Palestinian civilians”, Haley encouraged the fellow members of the council to vote for her resolution by, once again, framing the issue around Hamas and saying, “Each of you have a choice: you either support Hamas or not. This vote will tell the story”. As you can see, Haley tries to shift the focus to Hamas, thereby creating a false conception by which anyone who stands with Palestine is also supportive of Hamas and the violence this organization entails.

Such framing has two detrimental effects on our understanding of the issue. Firstly, by shifting the focus to Hamas, Zionists shift it from Israel and its crimes. It paints Israel as a state that exerts force only as a reaction to the violence of Hamas, which could not be further from the truth. The latest evictions of Palestinian families from Sheikh Jarrah that were described as a possible “war crime” by the UN is simple yet effective proof of Israel’s constant attacks that are simply ignored by Zionists who tend to frame the issue around Hamas.