How Canadians made many contributions during the war against fascists. 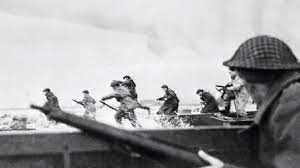 When learning about World War Two, most people know that D-Day was the turning point for the Allied Forces in the war and that the heroics of British and American soldiers helped to turn the tide of the deadliest war in human history. However, what many don’t know is how crucial Canadian soldiers were to the overall success of D-Day. Out of all of the five allied landing points in France, it was in fact where the Canadian forces landed, Juno Beach, where the most progress was made. The fact that the influence these soldiers had on D-Day - and consequently World War Two as a whole - is merely a side note in history is a great failure of history. This underrepresentation of Canadians during D-Day is just a part of the larger oversimplification of history, a problem which I believe needs resolved. The valor and bravery of the Canadians deserve to be recognized by others. Beyond this specific example of Canadians at Juno beach, countless other countries fought bravely during World War Two and deserve to be remembered for their sacrifices and achievements.

The Canadians, who as a part of the British Commonwealth had joined World War Two on the side of the Allies upon the onset of the conflict, had been massing in Great Britain in preparation for the retaking of mainland Europe. For many of the Canadian troops, D-Day was to be their introduction into the war as well as to violence in general. This makes it even more impressive that such an inexperienced group of soldiers was able to make so much progress against the entrenched Nazi forces.

Juno Beach was one of the most heavily defended beaches out of the five, with two German infantry battalions as well as nearby tank reserves securing it. Beyond the actual troops defending the beach, as with all D-Day landing points, the beach was covered in a gruesome puzzle of mines, barbed wire, and tank traps. This made the Canadians easy pickings for the well-fortified German machine gun and artillery bunkers. Even before reaching the beach itself, over 30% of Canadian landing craft were damaged or destroyed by mines or artillery fire. Facing stiff opposition as well as a tricky landscape, the Canadian Divisions knew this would be a tough landing.

However, after landing the Canadian troops were very successful and began rapidly capturing their preset objectives. Despite having been the last group to land at their respective beach and having one of the most well-defended beaches, they had made more progress by nightfall than any other beach. With support from British and Canadian Naval vessels as well as aerial bombardment, Canadian troops first landed on Juno Beach shortly past 7 AM. By nine that morning, already one of - if not the most fortified - D-Day landing beach had been all but captured. Many historians credit the success of the Canadians to some of the specialized equipment they had, for example DD Tanks, amphibious tanks which were absent from other beaches.

The location of Juno Beach made it all the more crucial that the Canadians succeed in their mission as it provided an important linking area between two of the British beaches, Sword, and Gold. Juno provided an essential tie to the struggling Gold Beach, and the combined front made by the two beaches allowed them to reinforce each other, something desperately needed by Gold Beach.

Overall, many historians deem Juno Beach to be the most successful D-Day landing point and the Canadians are due credit for this. Despite not having captured all of their predefined objectives, something not a single D-Day beach managed to do, the Canadians still managed to gain the most ground out of all of the beaches. Out of the approximately 22,000 Canadian soldiers who landed at Juno Beach, roughly 1,500 died, a relatively low ratio as far as D-Day beaches go but still a significant number, and we owe it to these 1,500 dead soldiers to not forget what they gave the ultimate sacrifice for.

There are so many groups who sacrificed hundreds of thousands of lives for the success of the Allied war cause and yet today get little to no recognition for said sacrifices. Along with Canada, other former British colonies such as Australia, New Zealand, India, South Africa, and others helped to shore up Allied defenses in Europe even while being threatened back in their homelands as well. And these commonwealth forces were decisive in keeping Britain in the war effort during the time before the US joined the fight. For the parts of the commonwealth who were at the time still colonies, most notably India, they had no choice in the matter, however, Canada had gained its independence much earlier in 1867, and therefore made a conscious decision to join the war effort. It is incredibly unfair to these nations that their contributions to the war are relatively unnoticed and uncelebrated.

While yes, it is true that technically the contributions of the British Commonwealth during World War Two are commemorated through Remembrance Day, they would be better celebrated, if said contributions were to be taught in schools. As someone with personal experience surrounding both the American and IB curriculums, there is no semblance of any details about the impact of Canadian Forces during D-Day, or really about the impact of any countries outside of the Big Three Allied Powers and France. Even the great success that is Juno Beach was only at most a side note in any history class. By only really teaching about the British, American, Russian, and French allied forces, our school system is leaving all other countries to become forgotten as time goes on and fewer students have the initiative to read about the successes of other nations.

Surely there is some argument to be made that the contributions of these “lesser” nations were insignificant compared with those of the major powers. However, as seen with this example of Canadians at Juno Beach, nations that overall may have been less important to the general war effort still played crucial roles and helped to create some of the most important turning points of the war. For this reason, I believe more should be taught to students about the smaller nations and the roles they played in conflicts. And this extends to so much more than just the Second World War. In World War One, similarly to Canadians in D-Day, other commonwealth soldiers, primarily Australian and New Zealander soldiers played essential roles in the not as successful but still important Battle of Gallipoli in the First World War. And throughout history, smaller nations tend to be sidelined in favor of today’s larger nations.

While as history grows larger and larger it obviously will become harder to study every little bit, that doesn’t make it any less important to do so. Much of the time these “little bits” can provide vital pieces of underlying importance that can aid with the understanding of issues and events as a whole. Of course, there is also the fact that without these small countries, defining moments in history could’ve been entirely different, meaning it is incredibly unfair to leave the contributions of smaller nations as a side note even though as with Canadians during D-Day they oftentimes have incredibly influential roles.

It is the writer’s opinion that one of the greatest shames of today’s school system is that so many important things are left out, and in many cases meaningful things. It isn’t even that these things have an inherent right to be studied but that they can be very key points for the broader understanding of concepts. Leaving them out can often mean that students will have a lesser understanding of themes and events. The 1,500 Canadians who died at Juno Beach, as well as the dead from other smaller countries, deserve to be respected and taught about instead of being left as mere footnotes in history.