There are big changes afoot in professional sports leagues. 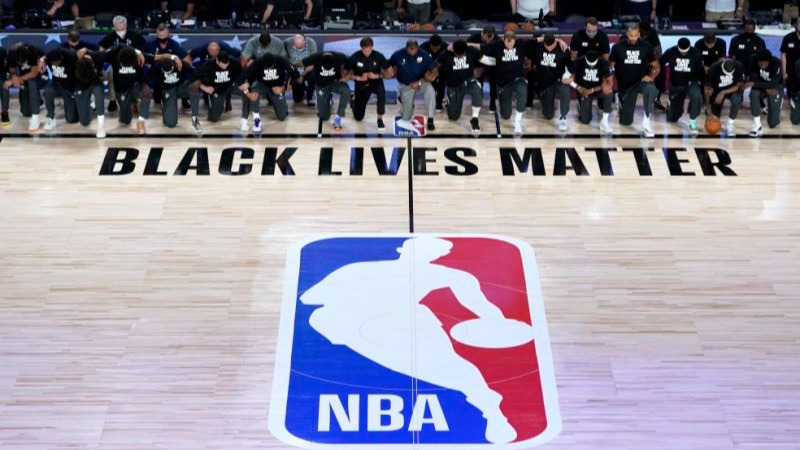 We’ve all heard the story of Colin Kaepernick: leading his team to a Super Bowl in 2012, to out of the NFL by 2016 after kneeling during the national anthem to protest police violence. What difference four years made for the young quarterback, and what difference four more years has made for the nascent, yet ascending movement surrounding racial justice. In 2020, Drew Brees, star quarterback of the New Orleans Saints, drew mass criticism after saying that he “will never agree with anybody disrespecting the flag of the United States of America” and was pressured to make an apology via Instagram. To simply disagree with someone about disrespecting the flag seems reasonable. However, Brees missed the point of the kneeling: Kaepernick initially sat in peaceful protest but was convinced by a military veteran to kneel instead, the reason being that we kneel when we are knighted, propose, or pray — never as a disrespectful act. The backlash that Brees faced is a sign of the times — even in one of the most conservative sports leagues, the fight for social justice has both become acceptable and even encouraged.

However, the rise of social justice and racism solidarity as profitable to sports had started a few years earlier: in 2018, when Kaepernick signed with Nike for a massive endorsement deal. Nike’s faith in social justice, amid the backlash from conservative boycotters and Trump, was admirable, but also strategic. Like most businesses formed in the era of Milton Friendman, their primary purpose is to increase their profits. And despite Nike’s stock dropping 3% in the hours after they unveiled their signing, they have risen in popularity among the demographic groups that buy the most athletic sneakers. Generation Z, which accounts for 40% of all consumers, strongly supports activist brands over others who just remain focused on business. Patagonia, who has built their identity around sustainability, recently released shorts whose tags read, “vote the assholes out.” The assholes being politicians who deny that climate change exists. I briefly considered buying some of the shorts, simply to show support and because there aren’t many brands who take these types of moral stands.

After the famous Kaepernick, “Believe in something. Even if it means sacrificing everything” ad, Nike made $6 billion. Of course, it’s nearly impossible to disentangle exactly how much money Kaepernick has made Nike, but it is clear that their stock hasn’t plummeted because of him. Thirty years after Michael Jordan said, “Republicans buy sneakers too” when abstaining from getting involved in Democratic politics, Democrats now buy so many more and will buy even more especially if Nike angers some conservatives.

The original reason that Kaepernick was forced out of the league was because of the owners: both their racism and their fears of fans’ racism. He is good enough to be signed, both reflected in the statistics and his Madden 21 rating, which places him as a top 15 quarterback in a league with 32 teams, each with three quarterback spots. Kaepernick remains unsigned despite the massive changes occurring in the NFL. Today, many football players feel comfortable enough to kneel or show their protest in other ways and announcers strike an encouraging tone. However, the multi-billionaire owners with the power, 30 out of 32 of which are white, remain conspicuously quiet. Some fans are still not onboard either — audible boos were heard from the Kansas City Chiefs stadium when players of opposing teams locked arms in solidarity before the game.

The National Basketball Association painted Black Lives Matter on their court and allowed players to have a social justice message on their jerseys after players debated even attending the “bubble.” Still, discontent rose among the players after the shooting of Jacob Blake in Wisconsin, and the Milwaukee Bucks decided to protest and sit out their playoff game. The team’s decision rippled through many other leagues and the NBA ground to a halt. Although two championship contenders, the Lakers and Clippers, unofficially voted to end the season, players eventually decided that their voices would be heard more through playing rather than boycotting. Indeed, players extracted valuable concessions from owners: arenas across the country will be turned into voting booths, mostly in urban, Democratic strongholds that have struggled to keep enough polling places open. These facilities, which can hold over 10,000 people, could serve as a socially distanced space for voters.

So does it matter if leagues and companies only support social justice movements because they are profitable? Possibly. While any action and mindset shift on social justice is greatly appreciated, support will prove fickle if it is only based on profits. As advertising mogul Bill Bernbach remarked, “It’s not a principle until it costs you money.” It is too early to see how the NBA and NFL will be monetarily affected, so we’ll have to wait and see what companies do if public opinion shifts and their newfound morals begin to cost them.