The reasoning behind terrorists' hatred of America. 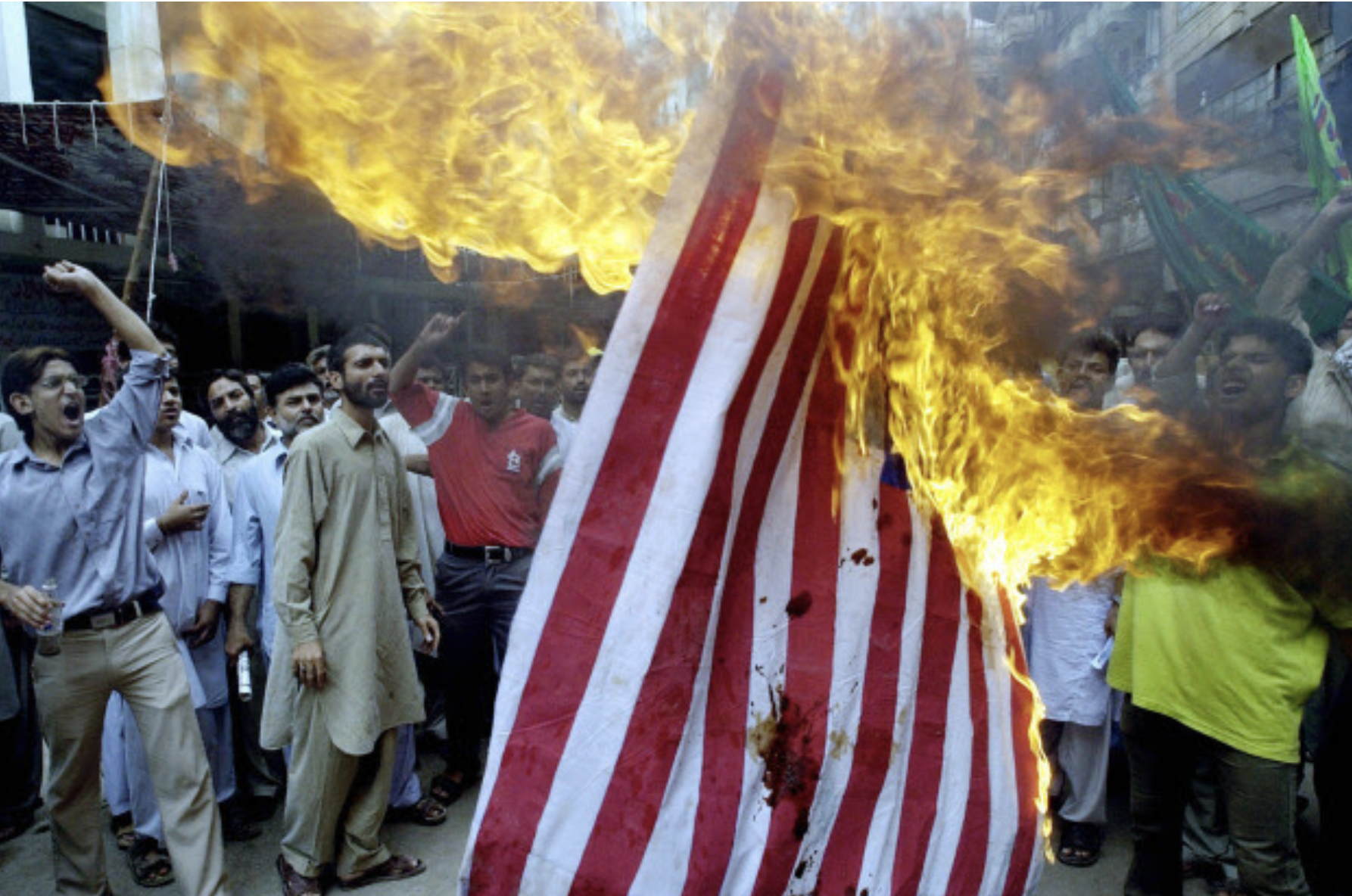 “They hate our freedoms: our freedom of religion, our freedom of speech, our freedom to vote and assemble and disagree with each other.” In an address to a joint session of Congress, President George W. Bush gave this answer in response to the question, “Why do they hate us,” commonly asked in the wake of the September 11, 2001 terrorist attacks that had taken place nine days earlier. Twenty years later, in the aftermath of the United States’ complete military withdrawal from Afghanistan, many Americans are still asking this question. What has brought these people, from a land so far away, to despise our freedoms, and our citizens? Is it an intrinsic part of their religion and culture, or have these radical ideals been shaped by American exploitation and warmongering?

To answer these questions, it would be appropriate to look back on America’s relatively short history of involvement with the Arab world. As a victor of World War Two, America solidified itself as a massively influential global power, and quickly entered into a political, economic, and ideological rivalry with the Soviet Union. The predominant practice in regards to America’s policy with the Soviets was containment, which gave the U.S. the excuse to entangle itself in foreign affairs in order to prevent the spread of Communism.  In Iraq, Jordan, Lebanon, and such other Middle Eastern nations, the U.S. intervened in several conflicts and disputes in the name of the Truman Doctrine, whose goal was to support nations that were potentially vulnerable to the Soviet Union by giving them aid.

From an outside perspective, it may seem absurd that the people of these nations that the U.S. has provided economic and military aid towards would so dramatically turn on the hand that fed them. The prime example of this, with possibly the most far-reaching consequences, would be the U.S.’ involvement in Afghanistan in retaliation to the Soviet Union’s 1979 invasion of the nation. As part of a covert aid operation, the U.S. helped finance and arm the mujahideen rebels in their fight against their Soviet occupiers, providing state of the art weaponry and hundreds of millions of dollars in assistance each year. However, as the Soviets withdrew after a decade of combat, soon after so did the Americans, leaving behind a broken Afghanistan, and an ensuing civil war. From this power vacuum sprung groups like the Taliban and al-Qaeda, deeply-religious organizations that can attribute part of their genesis to American backing during the Soviet invasion.

But the question still stands: What radicalized these groups into complete and violent hatred of the free world? While the federally-provided answer of “they hate our freedoms” is a vast oversimplification of the rationale behind their ideologies, that sentiment may still hold true to some extent. After World War Two, the United States became a beacon of prosperity for the developing world. America was a symbol of both technological and societal advances, and we provided these nations, wary after years of being subjugated to empires and oligarchies, with hopes of independence, and exports of fast cars, tailored suits, and soft drinks. These dreams of modernization and advancement in the Middle East were personified in Gamal Abdel Nasser, who helped lead the 1950's socialist movement that overthrew British rule in Egypt, before becoming president of Egypt in 1956. Nasser desperately desired modernization of not only Egypt, but the Arab world as a whole, and as Egypt was at the time the most prosperous nation of the Middle East, Nasser’s vision became that of the region.

Despite widespread support and policy integration, Nasser’s vision failed. Economies became stagnant under socialism, and nations eventually abandoned the movement in order to focus on their own interests. Some of these states, after coming so close to being a part of the new progress that the U.S. was leading, crumbled back into dictatorships and police states. When oil power came to rise so high in the 1970’s, hopes of wealth and prosperity were reignited in the people of Arabia, but it soon became clear that all of the petroleum profits would be funneled to a class of Arab elites, and benefactors from the globe’s superpowers. The people of the Middle East were still poverty-stricken, still oppressed by corrupt governments. Every step of the way, modernity had failed miserably. And thus, some began to resent westernization, and in turn, America. Seeing failure and destruction coming from both their current political systems, and the supposedly-promising ones of world powers, restless youths in organizations such as the Muslim Brotherhood began to turn to fundamentalism.

The religion of Islam, just like any other, is a complicated one. The Quran is an expansive tome, fraught with contradictions and highly-interpretable passages. The texts promote tolerance of other religions, though they state that Allah does not forgive those who worship false gods. The texts promote the modest dressing of both men and women, but radical groups have taken that to mean forcing women to cover up nearly their entire bodies in public. Throughout its history, though, Islam has been arguably one of the more tolerant and forward-thinking of the world religions, resulting in societies that made great advancements in the fields of mathematics and philosophy. Islamic fundamentalism, however, is the antithesis to any liberal messages of the Quran, and therefore is also the antithesis to the largely-liberal United States. In Osama bin Laden’s “Letter to America,” published in the Observer in late 2002, he supports his claim that the U.S. is “the worst civilization witnessed by the history of mankind” by citing our trade of alcohol, our support of homosexuals, our separation of religion and government, and most especially our supporting of, and participation in, the occupation of Palestine.

The nation of Israel, while geographically situated in the Middle East, is considered by its enemies as an outpost of the western world, an occupied land that’s end goal is to drive away the Muslim people, through economic, military, and societal actions and influence. While it was the British who devised and carried out the Partition Plan in 1947, dividing the British Mandate of Palestine into separate Arab and Jewish states, the U.S. has historically been one of the primary backers of Israeli independence, to the extreme disagreement of some Arab organizations. These radically-religious militant groups such as al-Qaeda see the occupation and dislocation of Palestinian citizens as an affront to their religion. With the militaries of both the U.S. and Israel being vastly superior to those of other Middle Eastern nations, these groups y see themselves as freedom fighters, the last defense against oppressive world powers, who take their land and steal their oil. With all the injustice done to them and their people, they see it as only right to strike back.

But why commit violence against our citizens—innocents who wished no ill will towards Middle Easterners, maybe with little to no understanding of the situation there at all? In bin Laden’s 2002 letter, he answers this question by going back to one of the fundamental principles of American society and governance: that the American people give their government its power. We choose our government, and by extension its policies. He states, through that line of reasoning, that the American people have chosen to support the oppression of the Palestinians, and the occupation of their land, and that if we truly wished, we could refuse to support those policies. He points to our taxpayer dollars that fund the planes and tanks that barrage the people of the Middle East with destruction, and the Israeli government’s continuing aggression. “It is commanded by our religion and intellect that the oppressed have a right to return the aggression,” he states, firmly centering his argument in his interpretation of Allah’s doctrine. It’s more than an eye for an eye. It’s a commandment. Those almost 3,000 people, going about their day’s work on a peaceful Tuesday morning in 2001, had unknowingly been sentenced to death by an organization of zealots so ingrained in an ideology that so fundamentally goes against the peaceful teachings of the grand authority of their religion, the Quran.

Before 9/11, the common image of a terrorist in the minds of the American public was of a young, white male, a violent loner harboring anarchist or Marxist ideologies. The attacks on the World Trade Center drastically altered that perception, shifting the image to one of a Middle Eastern man, and tainting the public’s view of the people of the Arab world. Before and after the attacks, the majority view of the general public of Middle Eastern nations was not in support of militant and terrorist organizations such as the Taliban, who at the time were implementing their strict and oppressive rule against the people of Afghanistan. Only through American military action in the Middle East has the widespread opinion of American policy been soured. In a global attitudes study carried out by Pew Research Center in 2002 and 2003, it was found that the U.S. was less popular in the Middle East than in any other part of the world, those opinions being formed primarily through Bush’s War on Terror, America’s arguably unfounded invasion of Iraq, and, still, American support of the Israeli government. As the years have gone on, though, Muslim support and confidence in terrorist organizations and extremist actions has steadily fallen, with a 2013 PRC poll of eleven majority-Muslim nations finding a median majority of Muslims across the nations not in support of the Taliban and al-Qaeda.

Not all, and not even close to most of the Islamic world hates America, and Americans. The reasoning behind those who do, however, is historic and complicated, and cannot be as easily explained as the question, “why do they hate us,” is asked, and most certainly cannot be summed up in, “they hate our freedoms.” With American withdrawal from Afghanistan in 2021, and the consequential Taliban takeover, only time will tell how foreign perceptions of the United States will continue to develop, and if those perceptions will again spark violent action.