Fan culture has many causes. 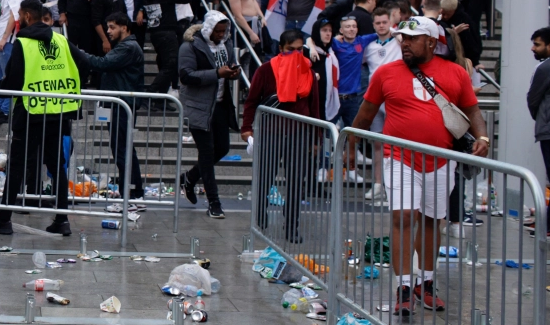 The recent incidents after the final of the Euro Cup didn’t surprise anyone, for sports have always been associated with hooliganism or violence, especially in those sports involving teams where fan culture is extremely popular. Multiple psychological studies have pointed out alcohol consumption as a major, or the primary, factor influencing violence in sports contexts, and there has been plenty of research analyzing this correlation. Yet many of the sports fanatics that consume alcohol have never reported partaking in this kind of behavior at the stadium or their homes. This leads to the belief that although alcohol is an important factor, others need to be considered to get to the bottom of this phenomenon.

Drinking has always been linked to sports, be it that you are watching them at home, at the stadium, or not watching at all. It is simply an unconscious association everyone makes. In a certain way, it is this general view that drinking while watching a soccer, basketball, hockey, or football game is acceptable that makes it so common. People can simply open a drink and chug it down their throat without anyone even batting an eye.

It is so common that research has found that approximately 40% of attendees at US professional American football and baseball games consumed alcohol while at the game, and had a high probability of going over the US legal limit. The grander and more hyped the sports event, the more probability consumption will be higher. The sports environment incentivizes drinking so much that drinking can go on for hours even after the event has ended.

One would say that drinking for one special day is no big deal and while it shouldn’t, the correlation between alcohol and aggression is no secret to anyone. Alcohol can have neurocognitive effects on the consumer that potentially provoke “reduced attentional control, information processing, and response inhibition”. At a place where sensory information arrives in all directions - music, shiny lights, loud noises, screens - this reduced capability of perception and dissection of information is extremely risky. As the attention span of the drinker narrows down so much, the inability to perceive the entire setting and contest can lead to misunderstanding of other’s actions or intentions as hostile. Thus, it can likely lead to disputes while watching the game or while leaving the venue.

There are multiple causes of violence. One is provocations, a recurrent stimulus in the sports environment. Another reason is due to a predisposition to act violently. There is also the inability to control oneself when provoked, which is greatly lessened while drunk, and explains why drunk behavior and aggression are so linked to each other.

Nevertheless, as a study on Brazil's football warriors evidenced from interviewees who had partaken in hooliganism in the past, these people did not tend to act violently outside of soccer, seeming as if their aggression while at sports games was merely an isolated act.

This information leads many to the conclusion that merely blaming the effects of alcohol consumed at the stadium does not cover all the potential causes for aggression at the venue or home. The act of drinking can be induced by other factors: its social acceptability and the enjoyment it produces. It can be for social acceptance, feeling as if they belong within the group of supporters of a team, or simply the one they are watching the game with. Drinking can also come as a form of coping mechanism, to either mourn over the defeat of one’s preferred team or to dissociate from problems one brings to the game - a form of escapism. Or it could be used to mourn the loss of one’s team, as a coping mechanism. It becomes clearer how isolating drinking does not fully explain the complex interaction between variables and the multi-causal phenomenon that aggression and violence are.

Not many consider the psychology behind fan behavior when analyzing anti-social behaviors from sports fans, yet it is easy to argue that it plays a big role in defining the tendency of spectators to act violently during or after the game. Fan behavior is directly linked with the concept of “Identity fusion” which has become more common within the psychoanalytical community. It is defined as the “sense of oneness one feels has in a specific group of individuals, which provides fulfillment socially and personally”. It consists of a fusion of the social and personal self by incorporating features inherent to a group into the construction of our identities. An example of this is the internalization of features from our nationality or family through the act of identification of one with the set of features these groups exhibit.

The way identity fusion works with sports fanatics is not dissimilar to the mechanism in which it works in the former examples. A sports fan can form a deep connection with what the identity of a team represents, and proceed to self-reflect their worth on the success of the team they decide to root for. As for why this fusion of selves is so common, psychologists have suggested that the feeling of belonging to a group is potentially a major factor for which many decide to even follow a sports team. Although the fanatics may not do this consciously, group affiliation can have multiple positive repercussions at a psychological level, such as “lower levels of alienation, loneliness, and higher levels of collective self-esteem and positive emotion”, as Daniel Wann, professor of psychology at Murray State University, suggests.

As great as this level of identification may sound, it is not all so ideal. Basing our assessment of self-worth on an external actor, as is a sports team, and specifically on their performance at an event over which we have no control, certainly has its drawbacks. A simple defeat can cause a fan’s self-esteem to greatly decrease, at least for a while, similar to how one would feel when underperforming at a personal task. In this sense, the team’s performance becomes a part of their being. One wants to be proud of the choices one makes, and deciding to root for a team is just one more decision that people desire to get acknowledged for taking.

So how can a team’s defeat, this decrease in self-worth, really affect a committed fan? On a more superficial level, it can lead to simple coping mechanisms, such as increasing their consumption of sugary and fatty foods on the days following the incident. On a psychological level, it can lead to mental mechanisms of self-deception, as if trying to persuade themselves that the team’s defeat was unwarranted (although in some cases it could be). This comes with the biased perceptions and criticism of referees, the other team’s players, and even the other fans as if the fault for the defeat was not due to performance but because of these agents. For example, a study of college basketball fans in the United States determined that those who were fans of the losing team reported greater levels of misbehavior on behalf of the opposing fans than those of the team who won. And denigration of others can lead to - you’ve guessed it - aggression.

The aggressive response is only heightened when the other is viewed as a rival, which is particularly the case in the context of a sports event. As in this study of adult fans and non-fans of the San Francisco 49ers, on average, highly identified male fans reported greater levels of aggression of the surveys conducted after watching both winning and losing videos of their favorite team than the less identified fans, and the reports of aggression were much greater if their team lost. This comes to evidence at least some correlation between the violence exhibited by fans in events and their levels of identification.

Not all fans, however, feel the need to bring violence into their sense of defeat. This only comes to show that, at least in most cases, there are other elements at the source of the aggression. Team sports are known to be predominantly male sports - the famous and recognized leagues are the male ones, a great majority of fans are men, and reporters are male. Sports media is also very tailored to the hegemonic straight male viewer displaying traits that appeal to what is assumed to be the male tastes - alcohol, fights, women (which show that it is also directed towards the male gaze). Not only that, but the sports themselves that are either spectated or televised tend to display mannerisms that are borderline (or not so borderline) aggressive, either by plating or conflicting with other players. The conjunction of all these visual impulses promotes the glorified image of the “alpha male”.

Envision this: a family man finally gets to go to that long-awaited game after an arduous week of work at his job - a job where he was forced to obey his obnoxious boss’s requests at all times. He is stressed out but decides to get his mood uplifted with the game in which his favorite team would be playing. Yet, they lose. So now he not only has to cope with his humiliated ego from his submission to his boss, but he also has to take the humiliation by the victorious team’s fans, whose display of happiness is made just to irritate him? And the injustice of the referee’s clear bias towards the other team? See the succession of factors?

In this case, and many others, the identification with and glorification of sports come as a refuge for those activities that impede men from following the macho-man image many societies condition them to. Losing that last string of masculinity in a defeat spikes up the imperious need to recover this virility through acts of aggression, However, as all psychological things, a one-fits-all behavioral response to the sense of defeat would be impossible to define, so the anchor to aggression in order cases can be more of a rudimentary emotional response to a big sense of loss felt deep within their psyche.

At the same time that violence comes as a response, all the other factors, the drinking, and the normalization of drinking by the context, the violent context itself, the glorification of violence through the masculine standards of sports, and all else come together in those apparent simple and animalistic displays of aggression.

Yet even without the sports context, domestic violence cases seem to rise whenever an important sports defeat takes place, which evidences the direct relationship between masculinity and sports media, and the resulting objectification of women through the promotion of virility, in the whole global environment of sports viewership. The topic of the connections between domestic violence and sports is still very inexact and full of possible fields of inquiry - from the image of the “other” in women promoted by media to the biased speech present in reported sports events - but this all comes to show the sheer complexity, multi-layer, and multidimensional nature of violence as connected to sports fandom.