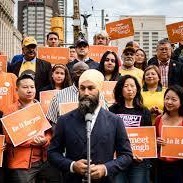 The US is known for having their two major political parties, the Democrats and the Republicans, but their northern neighbours have a different approach. The New Democratic Party, also known as the NDP, is a federal political party in Canada which was founded in 1961. (Canadian Encyclopedia) The NDP joins the Liberal Party of Canada and the Conservative Party of Canada as the main political parties in the country. The NDP additionally has the first Indo-Canadian political leader in Canadian history. Led by Jagmeet Singh, the NDP seems to be amassing a following that is headstarted by the youth. This can be linked to Jagmeet Singh playing the popular video game, Among Us, on a Twitch stream with popular politician Alexandria Ocasio-Cortez.  Jagmeet also makes interactive and trend-aware posts on social media accounts such as TikTok. (CTV News) While the NDP has never won a federal election, it has been involved with the provincial governments of Alberta, British Columbia, Manitoba, Ontario, Saskatchewan, and Nova Scotia. The current Premier of British Columbia, John Horgan, is the leader of the BC NDP. With analysis of the NDP in Canada, will it be possible to see a similar party in the United States?